Three common protocols still used in file transfer today are FTP, FTPS and SFTP. While the acronyms for these protocols are similar, there are some key differences among them, in particular how data is exchanged, the level of security provided and firewall considerations. Learning these key differences can help you when choosing a secure file transfer protocol or troubleshooting common connection issues. 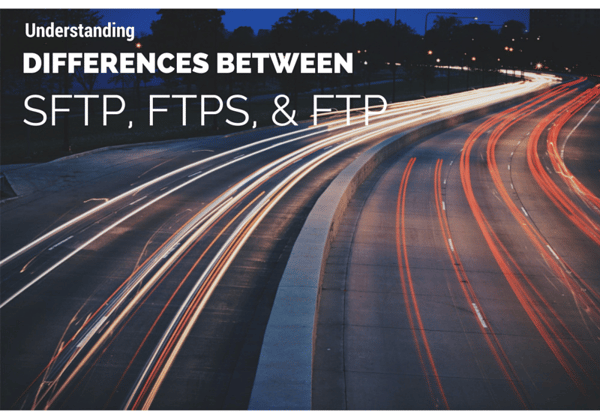 FTP (file transfer protocol) is a network protocol that has been around for decades. It was first proposed in RFC 114 over 40 years ago and eventually evolved into RFC 959, which is the standard that FTP clients and servers follow today.

The command channel typically runs on server port 21 and is responsible for accepting client connections and handling the exchange of simple commands between an FTP client and server. The USER and PASS commands used for authenticating an FTP user are examples of commands that are exchanged on the command channel. The command channel remains open until the client sends the QUIT command to disconnect, or the server forcibly disconnects the client due to inactivity or other reason.

The data channel, runs using on-demand temporary ports listening on the server (passive mode) or on the client (active mode) and is responsible for exchanging data in the form of directory listings and file transfers. The LIST, STOR and RETR commands used for getting a server directory listing, uploading a file and downloading a file are examples of commands (sent using the command channel) that open a data channel.  Unlike the command channel which remains open during the entire FTP session, the data channel is closed once the transfer of data is complete. In order to handle concurrent file transfers or directory listings a range of data channel ports must be used.

When using FTP, both the command and data channels are unencrypted. Any data sent over these channels can be intercepted and read. One common exploit that takes advantage of this particular vulnerability is the man-in-the-middle attack using ARP poisoning and a packet sniffer.

Many firewall issues encountered when using FTP are caused by a poor understanding of FTP's two modes: the active mode and the passive mode. The settings you will have to make on your server-side firewall or your client-side firewall will largely depend on which mode you choose. To avoid these issues, we suggest you take time for a deeper discussion on active and passive FTP.

When the FTP protocol was initially drafted, security was not a concern. Since then many things have changed and sending data over any public network without encryption is considered very risky and in some cases prohibited. Regulations like PCI-DSS and HIPAA, for instance, contain provisions that require data transfers to be protected by encryption.

In order to address this issue, a set of security extensions to create a more secure FTP protocol were proposed in RFC 2228 to protect data as it travels over the network using secure sockets layer (SSL) and now transport layer security (TLS). This encryption can be done manually, but is time-consuming and error-prone which is why organizations use FTPS servers/FTPS clients to provide data security.

Secure variants of FTP include FTPS Implicit SSL and FTPS Explicit SSL. Both use SSL/TLS encryption.

In implicit SSL mode a required SSL session is established between client and server before any file sharing occurs. As its name suggests, the use of SSL is implied and any attempt to make an FTPS connection without using SSL will be refused by the server. FTPS implicit SSL services generally run on port 990. Although still in use today, FTPS Implicit SSL is considered by many to be obsolete in favor of FTPS Explicit SSL.

In explicit SSL mode the client and server negotiate the level of protection used. This is very useful in that the server can support both unencrypted FTP and encrypted FTPS sessions on a single port. In an explicit SSL session, the client first establishes an unencrypted connection to the FTP service. Prior to sending user credentials, the client requests that the server switch the command channel to an SSL encrypted channel by sending the AUTH TLS or AUTH SSL command. Upon successful setup of the SSL channel the client then sends user credentials to the FTP server. These credentials, along with any other commands sent to the server during the FTP session, are automatically encrypted by the SSL channel. Similar to the way in which the command channel may be protected, the level of protection used on the data channel is negotiated between the client and server using the PROT command.

SSH file transfer protocol (SFTP) is often confused with FTPS even though these protocols have nothing in common except their ability to securely transfer files. SFTP is actually based on the SSH (Secure Shell) protocol, which is best known for its use in providing secure access to shell accounts on remote servers.

Recommended post: How To Install A SFTP Server on Windows

Unlike FTP/S, SFTP does not use separate command and data connections. Both data and commands are transferred in specially formatted packets via a single connection.

Would you like to try this yourself? JSCAPE MFT Server is platform-agnostic and can be installed on Microsoft Windows, Linux, Mac OS X and Solaris, and can handle any file transfer protocol as well as multiple different protocols from a single server. Additionally, JSCAPE functionality enables you to handle any file type, including batch files and XML. Download your free 7-day trial of JSCAPE MFT Server now.

Active vs. Passive FTP Simplified: Understanding FTP Ports
How To Auto Upload Files To A Server From A Local Directory
Tutorial For Working With The FTP Command Line
FTP Binary And ASCII Transfer Types And The Case Of Corrupt Files