If a client encounters problems when connecting to your FTP server, one of the first things you might want to check is your FTP data transfer mode. Depending on certain network configurations, this mode should be set to either active or passive. In this post, you’ll understand the salient points of active and passive FTP and learn how to avoid connectivity issues associated with them.

Before we talk about which mode is best for what scenario, let’s first cover one important topic: the two channels of an FTP session.

Note that the FTP ports we are referring to  up to this point are only the ports on the server side. We'll include client-side FTP ports in our discussion in a short while.

Among the two connection modes, active mode is the older one. Active FTP was introduced in the early days of computing when mainframes were more common and attacks to information security were not as prevalent.

Here's a simplified explanation on how an active mode connection is carried out, summarized in two steps. Some relevant steps (e.g. ACK replies) have been omitted to simplify things.

In passive mode, the client still initiates a command channel (control connection) to the server. However, instead of sending the PORT command, it sends the PASV command, which is basically a request for a server port to connect to for data transmission. When the FTP server replies, it indicates what data port number it has opened for the ensuing data transfer.

Here's how passive mode works in a nutshell:

Active Mode vs Passive Mode FTP: Which Is More Suitable For You?

There's a reason why I opted to simplify those two diagrams above. I wanted to focus on the main difference between active mode and passive mode FTP data transfers. If you compare those two diagrams, one of the things that should really stand out are the opposing directions at which the second arrows (which also represent the data channels) are pointing to.

In this section, we'll focus on those second arrows and the ports associated with them.

In the active mode, the second arrow is pointing to the client. Meaning, the client initially specifies which client-side port it has opened up for the data channel, and the server initiates the connection.

By contrast, in the passive mode, the second arrow is pointing to the server. Here, the server specifies which server-side port the client should connect to and the client initiates the connection.

There shouldn't be any problem had there not been any firewalls in existence. But threats to information security are on the rise and hence the presence of firewalls is almost always a given. In most cases, clients are located behind a firewall or a NAT (which basically functions like a firewall). In such cases, only a select number of predefined ports are going to be accessible from the outside.

Remember that in an active mode configuration, the server will attempt to connect to a random client-side port. So chances are, that port wouldn't be one of those predefined ports. As a result, an attempt to connect to it will be blocked by the firewall and no connection will be established.

In this particular scenario, a passive configuration will not pose a problem. That's because the client will be the one initiating the connection, something that a client-side firewall won't have any problem with.

It's possible for the server side to have a firewall too. However, since the server is expected to receive a greater number of connection requests compared to a client, then it would be logical for the server admin to adapt to the situation and open up a selection of ports to satisfy passive mode configurations.

As explained earlier, if you're administering an FTP server, it would be best for you to configure your server to support passive mode FTP. However, you should bear in mind that in doing so, you would be making your system more vulnerable to attacks. Remember that, in passive mode, clients are supposed to connect to random server ports.

Thus, to support this mode, not only should your server have to have multiple ports available, your firewall should also allow connections to all those ports to pass through!

How Wide Should The Passive Port Range Be?

The number of ports you need to specify in passive FTP largely depends on the number of concurrent connections/file transfers you expect to have. However, although, say, 100 concurrent file transfers would only require 100 open ports on the server, always remember that what most people consider as a "single file transfer" may actually consist of more than one. Let me explain.

For a typical end user, everything he downloads or uploads between the time he logs in to the FTP server and the time he logs out, is just part of a single FTP file transfer. That's not true. Each file transmitted during that entire login session will actually require at least one port. So if 10 files are downloaded, then 10 ports are used. That's not all.

Some clients now use multiple connections when uploading files.  For example, if a client has 100 files to upload, it might spawn 5 separate sessions to make the upload go faster.  The result is that a single client may have 5 open passive connections at a time.

So, when deciding how many passive ports you want to open you need to consider that a single client may actually open multiple concurrent passive connections. While there are no hard and fast rules dictating the number of ports that should comprise a port range, you will really want to project your maximum number of concurrent users and allocate a sizable allowance based on that.

Where To Set Up Passive Port Range In JSCAPE MFT Server

For those of you who are already using JSCAPE MFT Server, you can specify a range of ports for your passive mode FTP connections by going to Services > FTP/S > Passive port range in your JSCAPE MFT Server Manager. Because low ports (particularly those < 1024) are reserved, choose a high port range (i.e. large numbers). For example, from 5000 to 6000. For better security, don't just copy the example. Use your own! 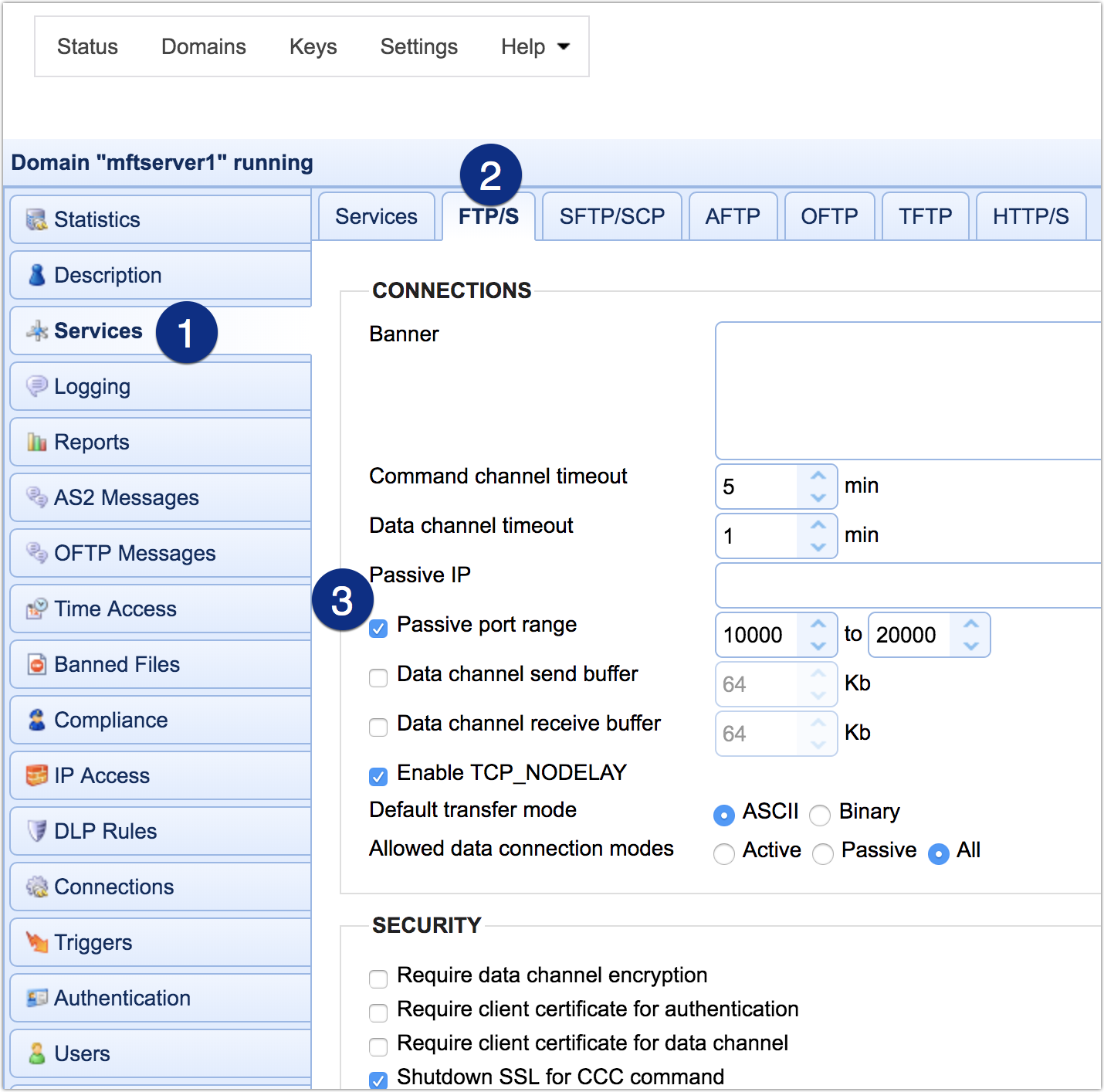 In the event that the IP address your server uses in responding to requests for passive connections is not routable via the Internet, you'll need to enter your public IP address in the Passive IP field.

We hope we were able to explain the difference between active and passive FTP in a manner you could easily understand.

Active-Active vs. Active-Passive High-Availability Clustering
Understanding Key Differences Between FTP, FTPS And SFTP
Tutorial For Working With The FTP Command Line
How To Create A Client Certificate