Data integrity checks are vital to secure communications. They enable communicating parties to verify the integrity and authenticity of the messages they receive. In secure file transfer protocols like FTPS, SFTP, and HTTPS, data integrity/message authentication is usually achieved through a mechanism known as HMAC. In this post, we explain what HMAC is, its basic inner workings, and how it secures data transfers. 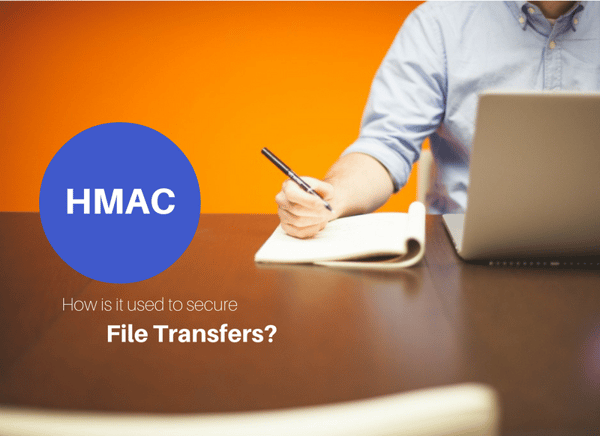 Business decisions and processes are highly dependent on accurate and reliable data. If data gets tampered with and these changes go unnoticed, it could affect decisions and processes down the line. So if your data has to be transmitted over a network, especially one as perilous as the Internet, you have to take precautionary measures to preserve its integrity or at least know if it has been hacked or altered.

This is precisely the reason why secure file transfer protocols like FTPS, SFTP, and HTTPS are equipped with mechanisms for preventing threats to data integrity. The most commonly used mechanism today is HMAC.

HMAC stands for Keyed-Hashing for Message Authentication. It's a message authentication code obtained by running a cryptographic hash function (like MD5, SHA1, and SHA256) over the data (to be authenticated) and a shared secret key. HMAC is specified in RFC 2104.

To understand how HMAC works, let's first examine how a hashed function (on its own) could be used for conducting a data integrity check on a file transfer. Let's say a client application downloads a file from a remote server. It's assumed that the client and server have already agreed on a common hash function, for example SHA2.

If an attacker manages to intercept the downloaded file, alter the file's contents, and then forward the altered file to the recipient, that malicious act won't go unnoticed. That's because, once the client runs the tampered file through the agreed hash algorithm, the resulting hash won't match the downloaded hash. This will let the receiver know the file was tampered with during transmission.

So a hash function should protect your files, right? Not so fast. While a hash function can establish data integrity, it can't establish authenticity. How would the client know the message it received came from the legitimate source?

A shared secret key provides exchanging parties a way to establish the authenticity of the message. That is, it provides the two parties a way of verifying whether both the message and MAC (more specifically, an HMAC) they receive really came from the party they're supposed to be transacting with.

The secret key enables this capability because it's generated during key exchange, a preliminary process that requires the participation of the two parties. Only those two parties who participated in the key exchange would know what the shared secret key is. In turn, they would be the only ones who would be able to arrive at the same result if they compute the message's corresponding MAC using the shared secret key.

Why Is HMAC Suitable For File Transfers?

Aside from its ability to enable data integrity and message authentication, another reason why HMAC is an excellent file transfer data integrity-checking mechanism is its efficiency. As discussed in the article Understanding Hashing, hash functions can take a message of arbitrary length and transform it into a fixed-length digest. That means, even if you have relatively long messages, their corresponding message digests can remain short, allowing you to maximize bandwidth.

Because an HMAC's properties (especially its crypto strength) is highly dependent on its underlying hash function, a particular HMAC is usually identified based on that hash function. So we have HMAC algorithms that go by the names of HMAC-MD5, HMAC-SHA1, or HMAC-SHA256.

You've probably heard about the collision-related vulnerabilities of MD5. It's worth noting that HMAC-MD5, in spite of its underlying MD5 hash function, isn't as affected by those vulnerabilities. Regardless, SHA-1 is still cryptographically stronger than MD5 and SHA-2 (and its different forms, like SHA-224, SHA-256, SHA-512) is likewise cryptographically stronger than SHA1, so you will want to take that into consideration.

How To Set Up An HTTP File Transfer