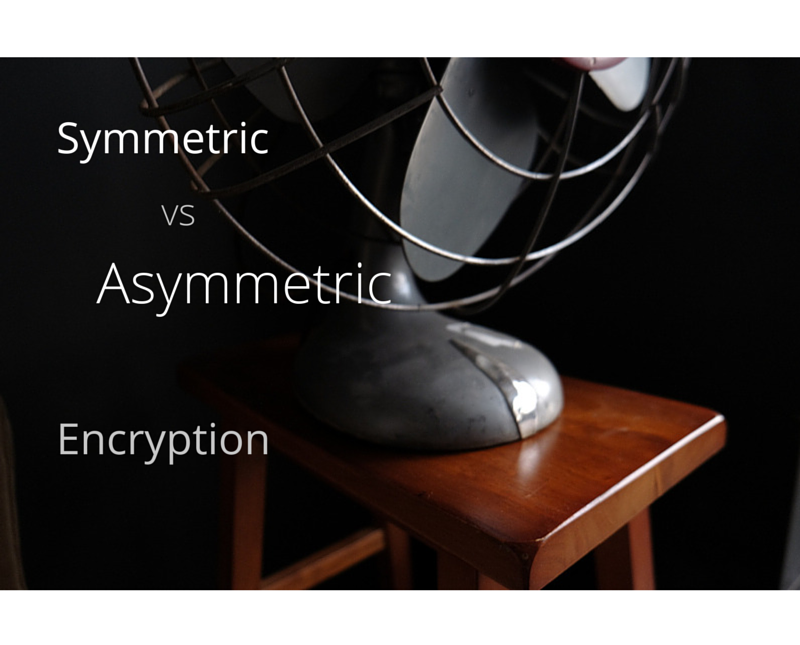 So if you manage a secure file transfer server that only supports symmetric encryption and one of your users wants to encrypt a file first before uploading it, one of you (either the user or you, the server admin) should first generate a key and then send the other person a copy of that key.

So, going back to the scenario given in the previous section, if you manage a file transfer server and one of your users wants to encrypt a file first before uploading it, it would typically be your duty to generate the key pair. You should then send the public key to your user and leave the private key on the server.

Instead, it would be more appropriate to compare asymmetric and symmetric encryptions on the basis of two properties:

Because the same key has to be used for encryption and decryption, you will need to find a way to get the key to your recipient if he doesn't have it yet. Otherwise, your recipient won't be able to decrypt the files you send him. However way you do it, it has to be done in a secure manner or else anyone who gets a hold of that key can simply intercept your encrypted file and decrypt it with the key.

The issue of key distribution becomes even more pronounced in a file transfer environment, which can involve a large number of users and likely distributed over a vast geographical area. Some users, most of whom you may never have met, might even be located halfway around the world. Distributing a symmetric key in a secure manner to each of these users would be nearly impossible.

Asymmetric key encryption doesn't have this problem. For as long as you keep your private key secret, no one would be able to decrypt your encrypted file. So you can easily distribute the corresponding public key without worrying about who gets a hold of it (well, actually, there are spoofing attacks on public keys but that's for another story). Anyone who holds a copy of that public key can encrypt a file prior to uploading to your server. Then once the file gets uploaded, you can decrypt it with your private key.

Getting the best of both worlds with hybrid cryptosystems

Because both symmetric and asymmetric key cryptography have their own advantages, modern file transfer systems typically employ a hybrid of the two. Some hybrid cryptosystems are: SSL (used in FTPS and HTTPS), SSH (used in SFTP), and OpenPGP, all of which are supported by JSCAPE MFT Server.

Hybrid cryptosystems employed in an SFTP or FTPS server use asymmetric keys to initially encrypt symmetric keys known as session keys. The session keys are then the ones used to encrypt the actual data. As its name implies, a session key is only used in one session. After the session, the key is simply discarded. That's a good thing because even if a session key is compromised, only data sent within that particular session will be at risk.

Here's a simplified outline of the steps taken by a typical hybrid cryptosystem used in secure file transfer protocols like SFTP and FTPS.

2. Client generates a session key, encrypts a copy of the session key using the public key, and sends that copy to the server.