The security of any SSL/TLS-protected connection largely depends on the client and server's choice of cipher suites. But what are cipher suites? If you use file transfer protocols like HTTPS, FTPS, and AS2 but don't know what cipher suites are, you will want to read this post and learn how to use a cipher. 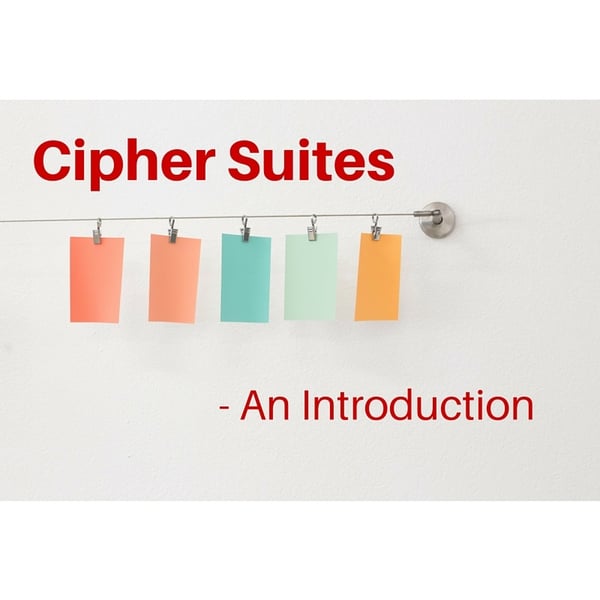 The definition of a cipher suite is basically a complete set of methods (technically known as algorithms) needed to secure a network connection through SSL (Secure Sockets Layer) / TLS (Transport Layer Security). The name of each set is representative of the specific algorithms comprising it.

To be clear, one cipher suite typically consists of one (1) key exchange, 1 authentication, 1 bulk encryption, and 1 MAC algorithm. If you're not familiar with what these algorithms do, I suggest you open those links above in a new browser tabs and read them later.

Here's an example of a typical cipher suite:

Let's break that down.

Sometimes, the protocol is simply omitted. Here's an example:

Again, breaking that down, we have:

Sometimes, algorithms are implied. For example, in the cipher suite RSA_AES256_SHA, the authorization algorithm (RSA) is implied.

Would you like to know what ciphers suites are supported by your browser? Head on to

for a quick practicum of what you've learned so far. The second site will even highlight which cipher suites are considered weak, i.e., have known vulnerabilities that can be exploited using existing tools and computing power.

As you can see, your browser supports a rather large selection of cipher suites. The server it's connecting to would normally have it's own selection as well.

Here's a screenshot showing some of the cipher suites supported by JSCAPE MFT Server, a managed file transfer server that supports FTPS, HTTPS, WebDAVS, and other secure file transfer protocols: 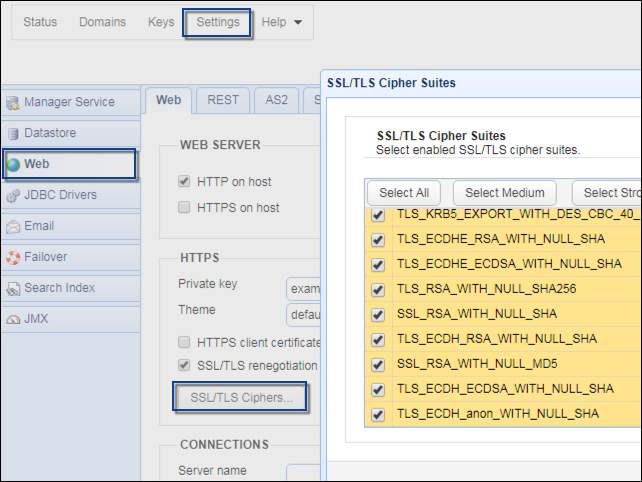 Where SSL/TSL cipher suites are used

Cipher suites are used in network connections secured by SSL/TLS. That means, network protocols like HTTPS, FTPS, WebDAVS, AS2, POP3, IMAP, and SMTP, all use cipher suites.

Before a client application and a server can exchange data over a SSL/TLS connection, these two parties need to agree first on a common set of algorithms to secure the connection. Yes, they're the algorithms we were talking about earlier. If the two parties fail to reach an agreement, then a connection won't be established.

The server then compares those cipher suites with the cipher suites that are enabled on its side. As soon as it finds a match, it then informs the client, and the chosen cipher suite's algorithms are called into play.

Your choice of cipher suites can spell the difference between having a secure connection and one that can be exploited. In order to avoid certain attacks, you will have to disable some cipher suites.

The downside of disabling cipher suites is that it can cause compatibility issues. More specifically, it can prevent certain clients and servers from having matching cipher suites and establishing a connection. Since popular browsers like Chrome, Firefox, Safari, and Internet Explorer usually update their list of cipher suites after a vulnerability is discovered, it's always best to advise users to install the latest browser patches.

That way, you'll be able to reduce your users' likelihood of encountering compatibility issues when, say, you disable weak cipher suites on the server side.

Looking for a file transfer server that will allow you to transfer files via HTTPS, FTPS, and other secure file transfer protocols? Try the free, fully-functional Starter Edition of JSCAPE MFT Server now.