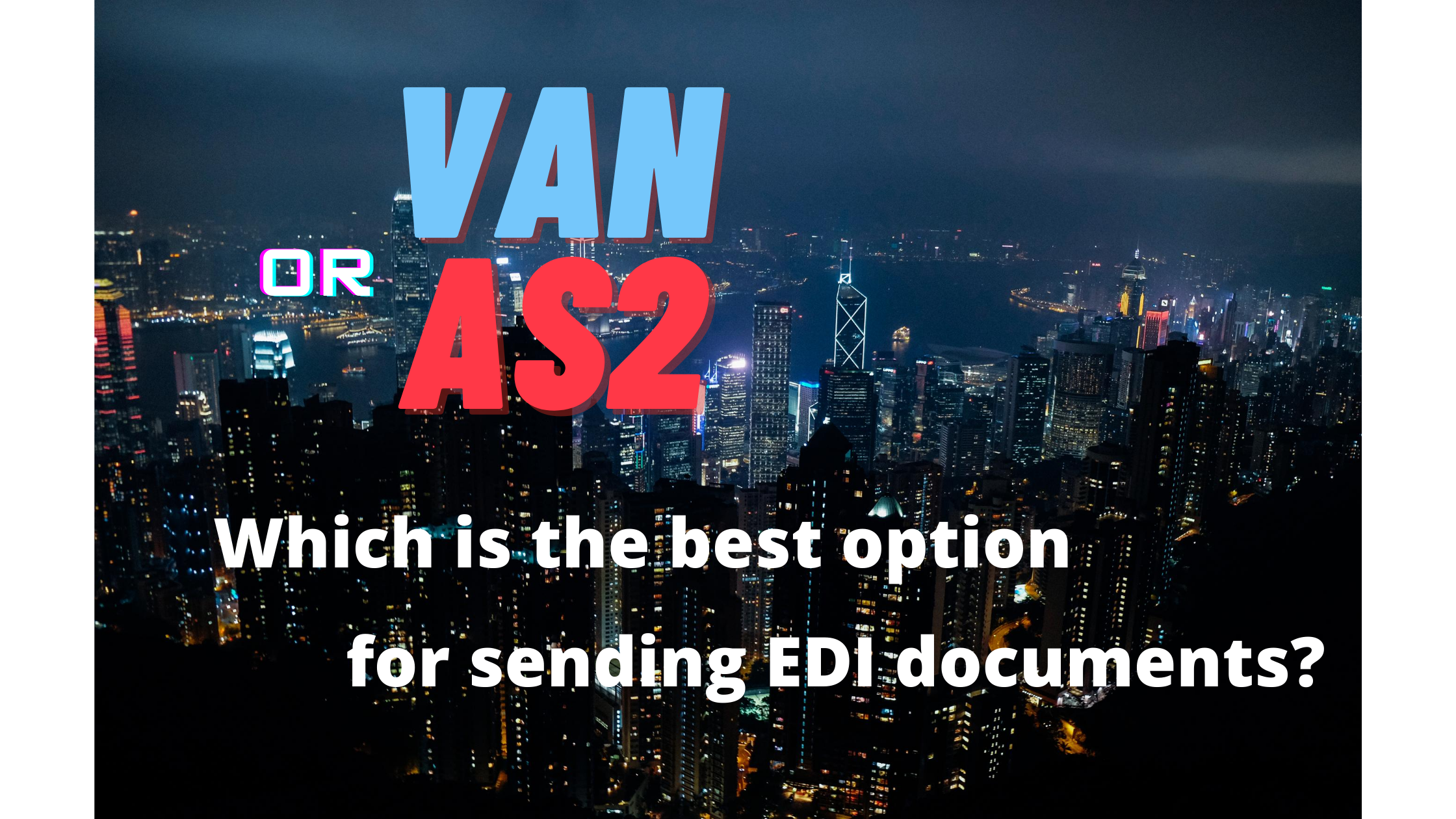 There are currently two ways of exchanging EDI documents. The first one involves subscribing with a third party known as a Value Added Network or VAN, while the second one involves using the AS2 protocol. Sure, there might be a few other less-known options out there but these two are, by far, the most widely used. But which of these two options is best for your business?

Let's take a look at some key considerations.

When you subscribe the services of a VAN, your cost will largely depend on the volume of data you transmit through their network. This is usually calculated on a per kilo-character basis, which is basically a measurement of the number of characters you include in your document.

Most VANs offer pay-as-you-go, monthly, or annual subscription models but all these models still revolve around the per character pricing concept. So, for example, when you go for a monthly subscription, you'll usually be entitled (or limited, however way you look at it) to a certain length of characters per document.

You'll need to pay a premium the moment you exceed that limit, which can happen very quickly since most character computations included spaces and delimiters.

Since your cost will vary depending on the amount of data you send, as your number trading partners and, consequently, number of transmissions (or size per transmission) grow, so will your costs. Before you know it, you'll already be spending thousands of dollars per month.

On the other hand, if you choose to use AS2 or Applicability Statement 2, you have a fixed cost. This cost is incurred only at the beginning, when you build your AS2 system. This would mostly involve the cost of your hardware (which can be zero if you deploy to the cloud), the operating system, and the AS2 application. Of course, there are also maintenance/administrative costs but they're just minimal. Once you have your AS2 system set up, there's no limit to the amount of data you can transmit.

This predictable, all-inclusive pricing is one of the major reasons why companies like Matisse Footwear have started replacing VANs with AS2 solutions like JSCAPE MFT Server. The higher the volume of EDI data you transmit, the greater cost savings you're going to realize against a VAN subscription.

Another major consideration when choosing between a VAN and AS2 is interoperability. In all likelihood, you're going to be transacting with several trading partners, each employing a different method of communication.

The advantage of using a VAN is that most VANs support a wide range of communication options, from modern Internet file transfer protocols (like FTP, FTPS, SFTP, and even AS2, among others) to more traditional methods like T1/T3 leased lines and dial-ups.

An AS2-only solution, unfortunately, doesn't have that capability. It will only allow you to exchange data with trading partners that support AS2. It's worth noting, however, that a growing number of companies have already shifted to AS2. In fact, several large enterprises will not transact with you if you're not using AS2.

Walmart, for example, requires all of its suppliers (which number to the thousands) to transact with them via AS2. The shift to AS2 adoption by large enterprises like Walmart, Amazon, 3M, Hyundai, Lowe's, Microsoft, and several others has already reached critical mass and has in turn created a domino effect down to their suppliers and trading partners. Thus, if your trading partners are not yet using AS2, there's a really good chance, pretty soon, they will.

Not all AS2 solutions are AS2-only. In addition to AS2, JSCAPE MFT Server can exchange data with a large and growing selection of network services, including:

This extensive selection will help you cater to a good number of trading partners and address interoperability issues.

Trading partner on-boarding is the process of establishing a connection with your trading partner, setting up the necessary configurations, testing connections to see if exchanges go through as expected, and, ultimately, rolling out the connection to production.

The on-boarding stage is crucial because if it's not done properly, actual business transactions in production can malfunction or even fail. This can lead to costly delays or faulty transactions that can, in turn, be disastrous to your or your partner's business.

Such a lengthy delay is no longer acceptable at this day and age, as it could result in missed opportunities and perhaps even loss of business. More so because there are far better alternatives.

Most AS2 solutions are not that easy to on-board with either. You need to struggle with access credentials, keys, From and To headers, URLs, and so on. But because you'll be dealing directly with your trading partner during the on-boarding process (instead of with a middle-man), the process can still be much faster compared to on-boarding through a VAN.

You can make on-boarding even faster if you use JSCAPE MFT Server. In addition to its highly intuitive interface, MFT Server comes with a special feature that greatly simplifies the exchange of trading partner credentials, which can in turn accelerate the on-boarding process.

Speaking of control, the level of control an AS2 solution like JSCAPE MFT Server provides you over a VAN can be invaluable, especially from a security and compliance standpoint. When your data has to go through a third party, not only is it exposed to greater risk because of the larger attack surface, you also have very little control of the level of protection being afforded to it. The risk gets even higher if your data is stored with your VAN.

With an AS2 solution like JSCAPE MFT Server, your data doesn't have to go through a 3rd party. This alone reduces your attack surface. In addition, JSCAPE MFT Server comes with a host of security features like multi-factor authentication, data-at-rest encryption, SSL/TLS data-in-motion encryption, and many others that add even more layers of security to your AS2 exchanges.

A lot of businesses and entire industries are now moving from VANs to AS2 solutions, so it's important that you adapt accordingly. You would not want to be left behind. Now, if you do decide to use AS2, choose a solution that's tested and proven. We highly recommend JSCAPE MFT Server, one of the leading AS2 solutions in the market today.

Should you wish to give JSCAPE MFT Server a test run, you can download the FREE, Starter Edition from here:

What is AS2 Protocol?

What are the Benefits of AS2 File Transfers?

How To Pick The Best AS2 Server For Your Business

Benefits of using the JSCAPE MFT Server as an AS2 Server

How to Setup an AS2 Server with JSCAPE - A QuickStart Guide

Tips for Setting Up an AS2 Encryption

The Ultimate Guide To Hardening Your Secure File Transfer Server