As an example, I'm going to show you the regular expression used in the DLP Rule for Master Card cards: 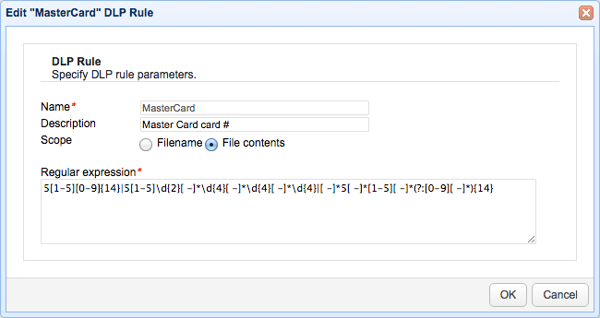 Let me paste that regex here:

If you review Part 1 and Part 2 of our Using Regular Expressions in Triggers series, you'll notice that there are a couple of characters found on this regex that weren't discussed there. We'll start with those characters.

Take a look at the first instance of {14}. That's new, so let's tackle that first.

Curly brackets { } are repetition operators, just like the *. They tell the server to repeat a character or set of characters placed right before it. The advantage of using { } is that you can specify how many repetitions can be made. You can choose from three basic syntaxes to do that:

2. {min,} - where min is the minimum number of times matches can be made and the maximum is infinite.

3. {exact} - where exact is the exact number of times matches should be made.

Since we only see that last syntax in the Master Card regex, we'll just focus on that for now.

When a 'd' is placed right after a '\' to form '\d', the managed file transfer server can match it with a single digit from 0 to 9. Meaning, it is a shorthand notation for the character class [0-9]. Therefore, \d{2} will match two successive single digit numbers each within the range 0 to 9. For example:

What's that ?: after the opening round bracket?

There's one more set of characters that should be new to you. It's the ?: found between the opening round bracket ( and the character class [0-9]. That's just a special syntax that tells the server not to create what is known as a "backreference".

A backreference is a regex feature which, upon finding a match between a portion in a string and a portion in a regex enclosed by a pair of round brackets, stores the matched characters into memory. Let's say you have this string:

This regex can be used to match it:

Once the server successfully matches secret(jpg), it creates a backreference, which essentially stores (jpg) into memory. That backreference can then be reused in later parts of the regex by using the syntax \1. You can also use other numbers like \2, \3, and so forth if you have multiple backreferences in one regex. Because we only have one backreference in our example, we just use \1.

Backreferences can be very handy. But because they entail additional processes, they can slow down your server. Whenever you don't want the contents of a pair of round brackets to create a backreference, you place a ?: right after the opening (. Once the server sees that, it will just use the round brackets for grouping that part of the regex without creating a backreference.

For example, you can use this regex:

to match these strings:

without creating any backreference.

Breaking down regular expressions in the DLP module

We're now in the position to discuss the regular expression used in JSCAPE MFT Server's built-in DLP rule for Master Card cards. Let me paste that again here so you won't have to scroll back up so much.

Notice that there are two vertical bars in that expression. If you recall from the last of Part 2 in our Using Regular Expressions in Triggers series, the vertical bar functions like an "or" operator. More specifically, it gives the server the option to match one out of many regular expressions.

In other words, any set of characters that match any of the three regular expressions above can satisfy the DLP rule for Master Card cards. Once the server finds such a set of characters, it will identify it as a Master Card card number. That will prompt it (the server) to perform any action you've instructed it to do (e.g. protect the file containing that card number using encryption).

This one's easy. This means, any string of characters starting with the number 5, followed by any number from 1 to 5, and then followed by 14 digits, with each of the 14 having values ranging from 0 to 9, can be considered as a Master Card card number. All in all, there should be 16 digits.

Here are some sets of characters that satisfy this particular condition:

And here are some that don't:

Obviously, the general requirements for constructing other regexes for this particular DLP rule should be the same as that first regex. That is, a Master Card card number should consist of 16 digits all in all, with 5 as the first digit and any number from 1 to 5 as the second digit.

However, not all users and software applications will record these card numbers using just pure digits. Others may include dashes and/or spaces.

That's when the second and third regexes can come into play.

Here are some simple examples that would match:

But these would match as well:

How is this possible?

This regex can identify a Master Card card number even if:

Thus, each of the following examples can match the regex:

It's really quite amazing how regexes can make your DLP rules very flexible.

What you've learned regarding regexes up to this point should be enough to help you interpret the DLP rules for the following credit card numbers:

or even the US social security numbers. I encourage you to check out those rules in the DLP module. That way, you can see if you really absorbed what we've been talking about so far.